Sandy Lu
$500
Newwestminster
Supporting staffs of NICU
Anonymous
$200
West Vancouver
My son spent 6 weeks at RCH NICU and the staff was very good to us. I will forever be grateful to RCH NICU
Al Wilson
$100
Anmore
Anthony & Courtney Petrunia
$100
Surrey
To all the heroes that carried our family through the hardest time of our life, thank you for all that you do.
Dianne Nichols
$100
Surrey
My daughter's sons Greyson and Graham were born 11 weeks and 6 weeks prematurely. Both received excellent care in the NICU and are thriving at 10 and 7 years old!
Karen Crew
$100
New Westminster
A service dear to my heart.
Lindsey Whittle
$100
Coquitlam
Both of our boys were born prematurely at RCH and spent a total of 9 weeks in the NICU. Thank-you to all of the Doctors and Nurses for taking such good care of us. Our boys are 10 and 7 years old now and doing great!
Mario and Jenna Arruda
$100
Coquitlam
For saving and nurturing our Ella for 129 days, 3 years ago! And for all the amazing things you do for so many families. We are still grateful every day for every single NICU staff/physician/nurse/specialist.
Michelle Goulet
$100
Langley
For Hazel
Michelle Goulet
$100
Langley
For Hazel
Anonymous
$50
Pitt Meadows
Our Granddaughter was transferred to RCH NICU when she was born and received excellent care. It is a very special place with exceptional people.
Marilyn Phillips
$50
Mission
Sandra Craig
$50
Port coquitlam
Zahra Stark
$20
Vancouver
John O'Toole
private
West Vancouver
In recognition of the dedicated, successful NICU team and their long track record of excellence.
Frances Chow
private
Vancouver
Janice Chau
private
New Westminster
Forever grateful for the dedicated staff, nurses, and doctors for the 137 days of care and support for our son.
Sharon Sundvick
private
Langley
Ruby Ng
private
Burnaby
Brinlyn O'Hare
private
New Westminster
Load More Show Less 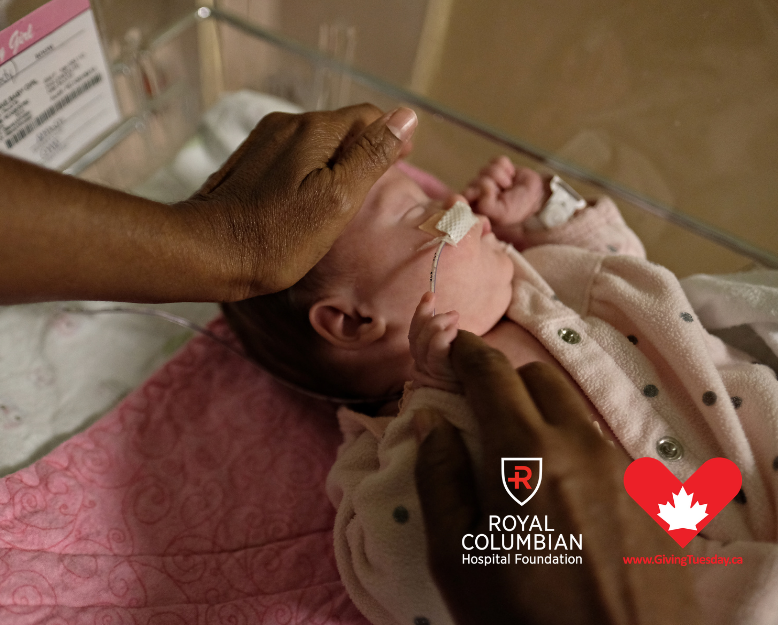 This #GivingTuesday, join the fight for BC’s smallest and most vulnerable patients.

Royal Columbian Hospital’s Variety Neonatal Intensive Care Unit has once again been recognized as having among the best outcomes in the country, despite the challenges of caring for babies born as early as 23 weeks into pregnancy and weighing as little as 400 grams or fewer.

In a time of immense pressure and uncertainly, the demand on Royal Columbian’s NICU has remained constant. To care for hundreds of sick and premature newborns each year, Royal Columbian’s dedicated healthcare team needs access to advanced equipment and technology, which you can help provide.

This Giving Tuesday (December 1, 2020), make a gift to Royal Columbian Hospital Foundation and support the purchase of equipment vital to the care of BC’s smallest and most fragile patients – equipment like NeoPuff Infant Resuscitators, which help guide the resuscitation of fragile neonatal patients in emergency situations, and a Neonatal Ultrasound Probe, which helps detect brain abnormalities associated with premature birth and offer diagnostics to ensure patients receive the care they need, as soon as possible.

The Foundation is immensely grateful to Royal Columbian Hospital’s neonatal physicians, pediatricians, and pediatric specialists for helping to lead our Giving Tuesday fundraising.

To make your Giving Tuesday gift, click the donate button by the supporters’ list or text BABY to 20222.

Follow us on Facebook (@RoyalColumbian), @Instagram (@royalcolumbian), and Twitter (@RoyalColumbian) to hear touching stories from some of Royal Columbian’s NICU graduates in the lead up to Giving Tuesday! Tag us in your own NICU story, using #GivingTuesdayRCH.