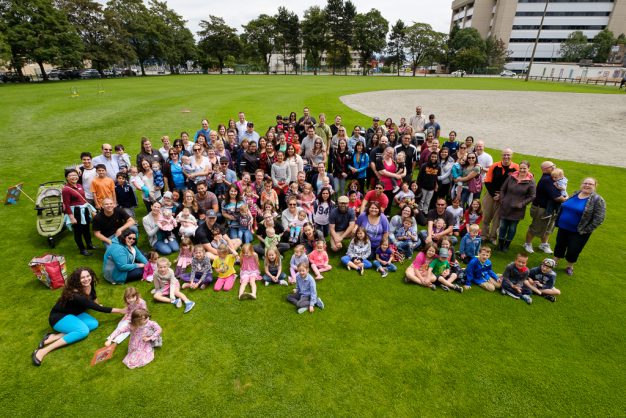 New Westminster, B.C. – {June 25, 2016} – The patients may be tiny, but the outpouring of gratitude is tremendous, as families whose newborns received care throughout the years at Royal Columbian Hospital’s Variety Neonatal Intensive Care Unit came together to say thanks.

More than 100 people gathered on Saturday, June 25, 2016 in Sapperton Park to celebrate the care delivered just across the street in the hospital’s NICU – one of four ‘Level 3’ centres in the province that are designated to care for the sickest and most fragile premature babies from throughout British Columbia.

“There’s an incredibly strong bond that forms between our neonatal team and the families that need our care,” says Neonatal Intensive Care Unit manager Queenie Lai. “Each of them becomes part of our great big NICU family.”

Royal Columbian Hospital’s Variety NICU has been recognized for close to two decades as consistently having among the best survival rates in Canada, despite the challenge of caring for babies born as early as 23 weeks into pregnancy and weighing as little as 500 grams or less.

“We are proud of our track record as one of the country’s top neonatal intensive care units for outcomes,” says neonatologist Dr. Zenon Cieslak. “The team’s commitment and compassion are some of the many reasons we’ve done well with our babies for so many years.”

Each of the families has a personal story and connection to the doctors, nurses and other health professionals who work in the NICU. For Ron and Stephanie Van Marrewyk of Ladner, the care their triplet girls Andy, Paige and Shauna received six years ago has inspired the family to raise more than $220,000 to date for the NICU.

“We felt so blessed to be surrounded by amazing nurses and doctors,” says Stephanie. “Even though we suffered through some very scary times, the love, care and medical treatment we received from staff at Royal Columbian Hospital truly is unforgettable.”

This year, the family is helping raise money for an Infant Transport Incubator. This equipment allows for safe transportation of fragile newborns between departments or hospitals. It is a self-contained, mobile, intensive care unit.

“Each piece of equipment funded by our donors to the NICU helps give our newborns the time they need to get stronger and healthier,” says Royal Columbian Hospital Foundation President and CEO Jeff Norris. “Donors are helping our babies breathe, stay warm and get the care they need in situations where each minute counts.”

Centre of excellence
Royal Columbian Hospital provides specialized care including cardiac services, trauma, neurosciences, high risk maternity and neonatal intensive care for some of the most seriously ill and injured people from across British Columbia. Located at the heart of one of the fastest growing health regions in Canada, the hospital serves a population of more than 1.7 million people (one in three British Columbians). Royal Columbian is also a UBC teaching hospital with a Clinical Academic Campus.