Family & friends of triplets give back to Royal Columbian NICU 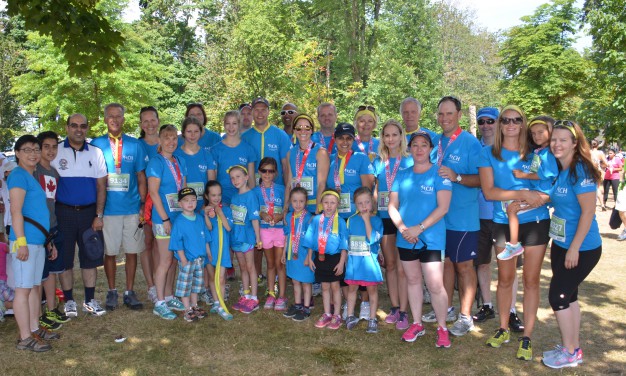 New Westminster, B.C. – {June 29, 2015} – A Ladner family and their friends will purchase a life-saving piece of equipment for premature babies and other fragile newborns at Royal Columbian Hospital, five years after triplet girls received care in the hospital’s Variety Neonatal Intensive Care Unit.

The Van Marrewyk family collected $55,000 in donations to help Royal Columbian Hospital Foundation buy a jet ventilator, in appreciation of the hospital’s neonatal staff after Ron and Stephanie Van Marrewyk’s daughters Andy, Paige and Shauna were born prematurely at 29 weeks in 2010. The girls spent two months in the neonatal intensive care unit.

“The neonatal intensive care unit is responsible for the health of so many of the beautiful people that are in each of our lives,” says Stephanie Van Marrewyk. “We’re incredibly grateful to everyone who has helped raise the money needed for this important equipment.”

The jet ventilator will provide a gentle and effective mode of ventilation to help the most fragile premature babies breathe, since their lungs are not developed enough for them to breathe on their own. Oxygen is delivered to the baby via small high-frequency breaths, or micro-vibration, rather than mechanical in/out forced pumping, providing optimal respiratory care and virtually eliminating lung trauma.

“Each year, Royal Columbian Hospital’s neonatal intensive care unit is responsible for the lives of hundreds of newborns from throughout the province,” says Royal Columbian Hospital Foundation President and CEO Jeff Norris. “The neonatal staff are highly skilled, and fundraising efforts like the one led by the Van Marrewyk family put specialized tools in the hands of those caregivers.”

More than 30 family members and friends took part in the Scotiabank Charity Challenge on Sunday, June 28 to raise money for the latest equipment purchase. Fundraising efforts by the family in previous years have helped to buy incubators and infusion pumps for the neonatal intensive care unit.

Centre of excellence
Royal Columbian Hospital is a Fraser Health referral hospital providing specialized care for trauma, cardiac services, neurosciences, high risk maternity and neonatal intensive care for some of the most seriously ill and injured people from across British Columbia. Located at the heart of one of the fastest growing health regions in Canada, the hospital serves a population of more than 1.7 million people (one in three British Columbians). Royal Columbian is also a UBC teaching hospital with a Clinical Academic Campus.