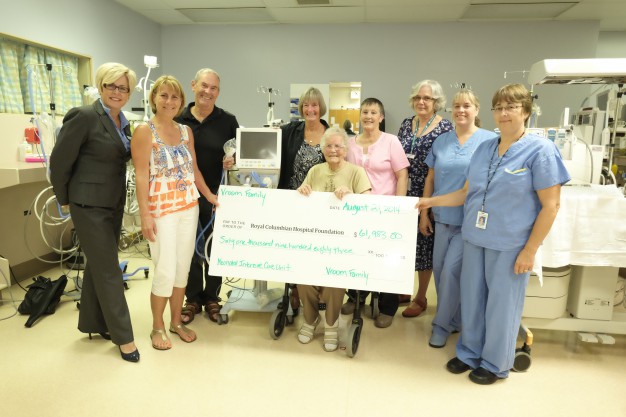 New Westminster, B.C. – {August 21, 2014} – A family that tragically lost infant twins more than 60 years ago is keeping them in their thoughts by helping premature and sick newborns at Royal Columbian Hospital.

The Vroom family has generously made a $61,893 gift to the Foundation to purchase for the hospital’s Variety neonatal intensive care unit (NICU) a specialized ventilator that gives premature babies the extra help they need to survive their critical first days.

“Royal Columbian cares for some of the smallest and most fragile newborns in the province,” notes Royal Columbian Hospital Foundation Chair Doug Eveneshen. “With this gift, the Vroom family will make a positive contribution to the lives of numerous infants and their families each year.”

The donation honours the memories of fraternal twins Robert and Christine Vroom, who passed away soon after their births in 1953 in Pembroke, Ontario. Following donations last year to two Ontario hospitals, the family chose to donate to Royal Columbian Hospital Foundation since a relative was once trained as a nurse at the hospital.

The contribution also fulfils the commitment made by the twins’ father, Robert Vroom, prior to his death last year. His wife Isabel, children Judy, Peggy and Richard, as well as daughter-in-law Neilda Hayes visited Royal Columbian Hospital today.

“It means a great deal to us to know we can pay tribute to our loved ones by helping to ensure the best care is available,” says Isabel Vroom.

The Leoni ventilator supports the lungs of premature babies until they are able to maintain respiration on their own. Royal Columbian Hospital cares for more than 800 babies in its neonatal intensive care unit each year.