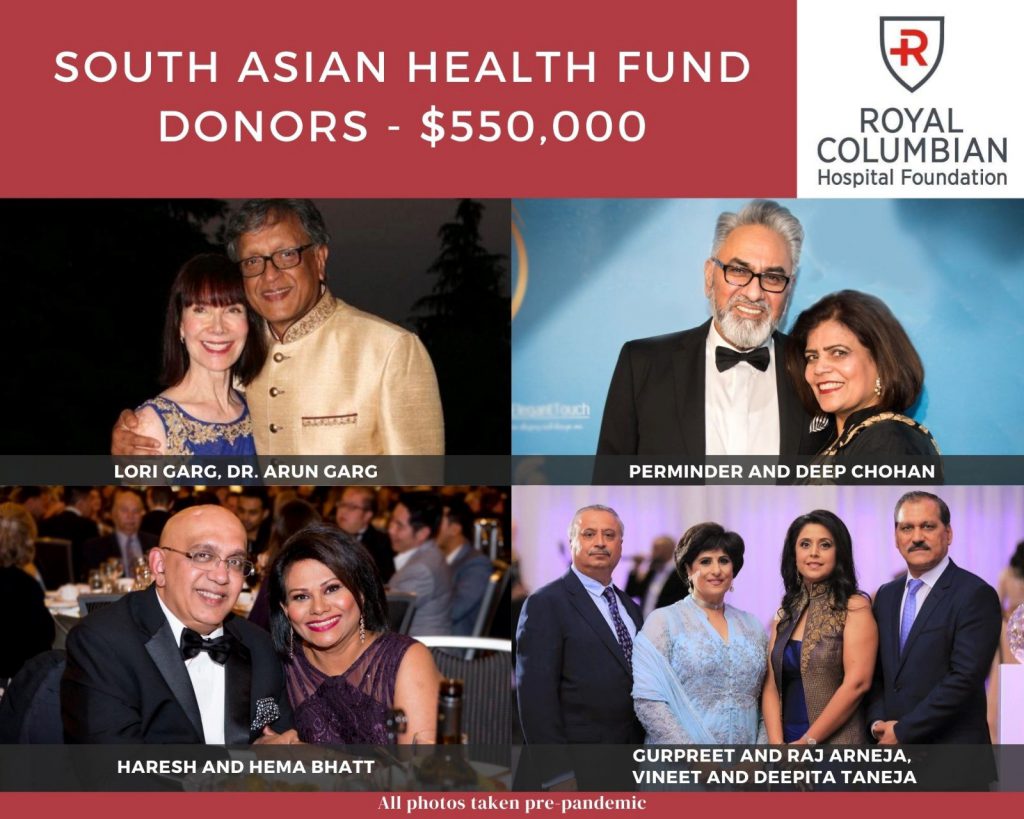 Dr. Arun Garg, who has served over 50 years at Royal Columbian Hospital, founded the South Asian Health Fund. The fund was created to involve the South Asian community in initiatives related to health, prevention of illness, and management of chronic diseases. He is known as a visionary for his work in the field of health and sciences. He along with his wife Lori Garg donated a sum of $250,000 to the fund

Businessman and Philanthropist Perminder Chohan along with his wife and Deep Chohan have donated $100,000 to fund. Chohan, who moved to Canada from India over 30 years ago, is a respected philanthropist and successful businessperson in the South Asian community. He has experienced more than his fair share of struggles on his journey to becoming a prominent name in the financial services industry, as Managing Director of Desjardins Financial Security Independent Network – BC with over 600 advisors and multiple offices.

The couple donate to over 36 charities every year. Both Perminder and his wife Deep believe in the culture of giving back to the community, whether it is where they came from or where they have built a life for their family. He set up the Perminder Chohan Foundation to provide education, healthcare and everyday living needs for people in need. The Foundation organizes multiple food and blanket drives annually and the proceeds are donated to food banks and shelters in the Lower Mainland.

“I have always felt very humbled by the fact that I’m able to give back to my community over the years in many ways,” says Perminder. “Deep and I officially made the announcement of our contribution to the South Asian Health Fund at the Royal Columbian Hospital Foundation, and we hope they continue their great work.”

Haresh and Hema Bhatt’s Port Coquitlam-based company Natu’oil is one of the largest importers of Palm oil and energy supplements in North America. The couple moved from Malaysia to Canada to carve a better future for their daughters. Their hard work led them from humble beginnings to become successful business owners, but philanthropy has remained an important part of their lives. Over the years, the couple has supported various charities like the Terry Fox Foundation, Miracle Connections, SHARE Family and Community Services Food Bank, the Power of Hope music program for incarcerated youth, Eagle Ridge Hospital, BC Children’s Hospital, the Gujarati Society of BC, Indian Summer Festival, Medical Camps in India, and many more.

“Our family has had the good fortune of receiving excellent care and treatment at the Royal Columbian Hospital,” says Hema, who is committed to give back to the community. She believes that being one of the busiest hospitals in BC, Royal Columbian Hospital provides the highest level of care to the critically ill and injured and therefore is very important for the community.

Nanak Foods owners Gurpreet Arenja and Raj Arneja and Vineet Taneja and Deepita Sidana also donated a sum of $100,000 to the South Asian Health Fund. Nanak Foods is in its 24th year in business and is bustling with 250 employees working in a state-of-the-art production facility. There are now 45 deliciously authentic products, including dairy items, appetizers, desserts, mithai . Most are shipped to over 15 countries and supplied to seven international airlines.

Nanak Foods is a socially responsible company that supports a diverse range of health, arts, education, and culture initiatives both in Canada and abroad. Other recent charitable & philanthropic efforts donations include the Children’s Campaign of Surrey Memorial Hospital to upgrade the children’s ward, BC Cancer Foundation, and an Endowment deed- Nanak Foods Endowed Business Bursary & most recently Flood Relief in BC.