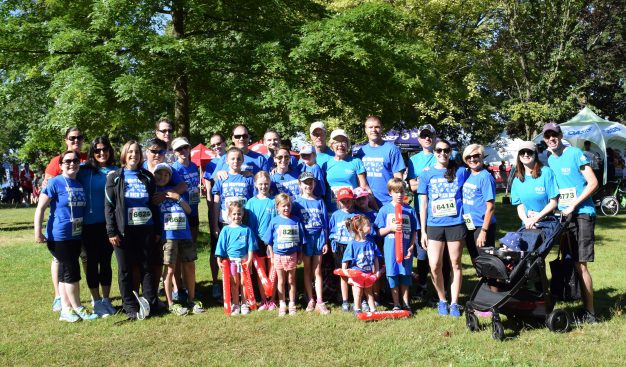 New Westminster, B.C. – {June 27, 2016} – A Ladner family whose charitable efforts since the birth of their triplet daughters have helped purchase life-saving equipment for premature babies at Royal Columbian Hospital is determined to reach its latest goal after a successful weekend fundraiser.

The Van Marrewyk family exceeded this year’s $60,000 target for the hospital’s Variety Neonatal Intensive Care Unit (NICU) during the Scotiabank Charity Challenge on Sunday, June 26. More than 35 family and friends joined efforts to raise $65,000 in support of the hospital’s tiniest patients.

“We are so pleased that we have been able to connect with other families that have received outstanding care at Royal Columbian Hospital,” says Ron Van Marrewyk. “It’s been our hope since we started that we could grow the network of supporters into a strong fundraising group for the NICU.”

The money raised this year will go towards an overall $200,000 goal to purchase an Infant Transport Incubator. The equipment allows for the safe transportation of premature babies between hospital departments or even between hospitals. It is a self-contained, mobile, intensive care unit.

“The Van Marrewyk family and other donors are part of the reason why the NICU is consistently recognized as being among the best in the country,” says Royal Columbian Hospital Foundation President and CEO Jeff Norris. “Our donors help put the right tools in the hands of an incredibly dedicated and passionate team of neonatal experts.”

Royal Columbian Hospital’s Variety NICU has been recognized for close to two decades as consistently having among the best survival rates in Canada, despite the challenge of caring for babies born as early as 23 weeks into pregnancy and weighing as little as 500 grams or less. The NICU is one of four ‘Level 3’ centres in the province that are designated to care for the sickest and most fragile premature babies from throughout British Columbia.

Since 2012, the Van Marrewyk family has helped raise more than $220,000 for the hospital’s NICU. In previous years, their efforts have led to the purchase of incubators, infusion pumps and a jet ventilator.

The family’s daughters Andy, Paige and Shauna were born prematurely at 29 weeks in 2010, weighing between two and three pounds each. The girls came under the care of Royal Columbian’s NICU for several weeks.