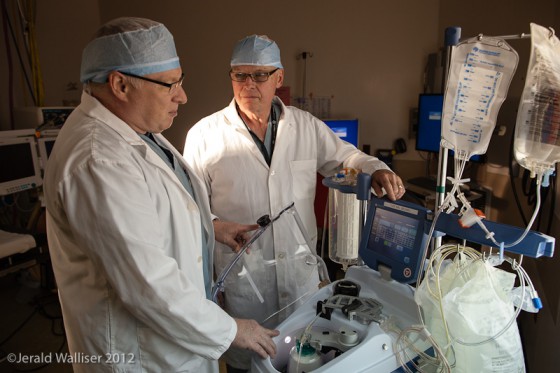 Woodward’s has been a landmark in downtownVancouversince 1892, almost as long as the Royal Columbian Hospital has been a landmark on theFraserRiver, since 1862. Both historic entities have been part of the colourful history of Metro Vancouver. During the past 46 years Mr. and Mrs. P.A. Woodward’s  Foundation has been a proud supporter of theRoyal Columbian Hospital Foundation(RCHF) and today, when it presented a cheque of $40,000, it brought its total giving to $1,150,000.

The most recent donation will purchase a new Cell-saver for RCH. Cell-savers are technically advanced machines that retrieve blood in high blood loss situations from the patient, and then returns the blood back to the patient’s body. Used to suction blood from surgical sites, the cell-saver washes the blood, removing all contaminants such as broken blood cells and fat molecules and gives the patient back his or her own blood, full of healthy red blood cells.

“At RCH, cell-savers are used 70 percent of the time in cardiac surgery, but they are also used in any situation of catastrophic blood loss for trauma patients or for patients with large blood vessel issues such as aneurysms,” says Dustin Spratt, Chief of Perfusion at RCH and one of only 36 perfusionists in B.C. “General best practice around blood product usage (blood transfusions) today is to limit its use and the cell-saver plays a primary role in doing this. Limiting use of blood product greatly reduces the amount of blood products used and thus the associated risks that comes with its use. Many lives are saved in trauma or in surgery because of technology such as cell-savers.”

Woodward’s is often remembered for its iconic 1944 landmark “W” that was installed on the top of the downtown Vancouver store on a 25 metre replica of the Eiffel Tower, replacing a pre-war searchlight-beacon that had until then been the building’s hallmark. At that time George T. Wilson was Chief of Surgery at RCH. In an address to the School of Nursing’s 60th Graduation class he reminisced of those days saying: “Our early transfusions were tentative affairs – a major match only. The Rh factor (determined by the presence or absence of a particular erythrocyte protein)was unknown and no Kahn test (syphilis test) was done. The first ounce or two of the transfusion was anxiously watched. If the patient turned pale, begun to sweat, or showed signs of imminent collapse, it was stopped at once – something was wrong – we knew not what. However, as a rule, all went well and the nurses saw the miraculous improvement in the condition of the badly shocked, exsanguinated victim of some traffic or industrial accident.”

Cell-savers were first established in the 1970’s. Initially they were used for blood transfusions, but soon became essential equipment for traumas and open-heart surgery. When the first open heart surgery was performed at RCH by Dr. Robert Hayden in 1991, the cell-saver was very rudimentary and did not provide the same level of technology and safety it does today. It consisted of very basic pumps and the tubing was washed, sterilized and reused. Today, all tubing is disposable – one circuit, one patient – this avoids contamination from another patient’s blood. Even more noteworthy is that the perfusionists can now analyze the patient’s blood in-situ without having to send a blood sample to the laboratory.

“In the early 1960’s, Mr. and Mrs. P.A. Woodward’s Foundation made a substantial contribution to the first formal Intensive Care Unit to be established in Canada at St. Paul’s Hospital in Vancouver. They saw the direct impact of this gift on patients’ lives and became convinced that they wanted to donate to medical equipment that has a direct application to medical care. The refined technology of the cell-saver at Royal Columbian meets this criterion,” said Dr. J. Wm. Ibbott, Medical Advisor to the Board of Directors for Mr. and Mrs. P.A. Woodward’s Foundation.

“Long time donors such as Mr. and Mrs. P.A. Woodward’s Foundation contribute significantly to help RCHF meet its goals in funding much needed critical equipment each year for RCH,” says Adrienne Bakker, CEO and President for RCHF. “Our hospital, a leading trauma, cardiac and neurosciences centre, has dedicated and outstanding physicians and medical staff. By placing the right tools in their hands we help save lives.”

RCH currently has eight cell-savers in use thanks to the support and generosity of donors such as Mr. and Mrs. P.A. Woodward’s Foundation. For further information on how to make a donation to Royal Columbian Hospital Foundation, contact 604 520 4438 or visit www.rchcares.com.