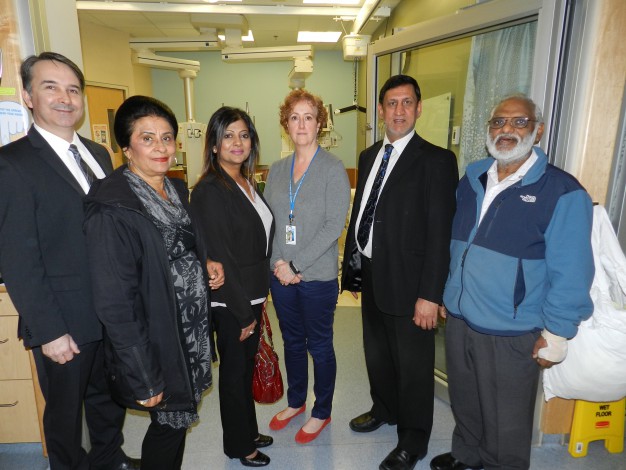 Members of the Muslim Business Council of BC are joined by Foundation and hospital representatives on a recent tour of Royal Columbian’s Intensive Care Unit.

New Westminster, B.C. – {November 24, 2015} – The Muslim Business Council of BC has made quick work of its goal in support of Royal Columbian Hospital’s critically ill and injured patients.

The total of more than $30,000 raised at the dinner will be directed by the Foundation towards a new Transport Monitor, which is used to keep a close watch on intensive care patients’ vital signs as they are carefully moved around the hospital for testing and procedures.

“We are so appreciative of the efforts of the Muslim Business Council, who have demonstrated a strong desire to make a difference for patients who are recovering from life-threatening conditions,” says Foundation President and CEO Jeff Norris. “As a leading trauma centre in the province, Royal Columbian Hospital sees complex cases from throughout the Fraser Health region, and the generosity of council members will provide a valuable tool that tracks these patients’ heart rates, blood pressure and cardiac rhythms.”

The Muslim Business Council of British Columbia, established in 2008, is an organization promoting the interests of the Muslim community, professionals and students who work and live in British Columbia. Members are drawn from diverse sectors of the provincial economy.

“We, at Muslim Business Council, are involved in philanthropy by supporting local hospitals and other charities in need,” says Council Chair Mohammed Yasin. “Our goal is to help make the community and the world a better place for everyone one step at a time.”

“In organizing this successful fundraising event, the leadership of the Muslim Business Council have shown determination, sincerity and a real passion for helping others,” says Norris. “Without their hard work and the thoughtful contributions of their members, the Foundation could not purchase this vital equipment, which will help our health care professionals deliver exceptional care.”