A new mental health and substance use facility, outpatient clinics and better care for seniors are part of the first phase of redevelopment of Royal Columbian Hospital. Health Minister Terry Lake today announced business plan approval for phase one of the redevelopment, with a $249.8 million commitment from the Province and $9.1 million from the Royal Columbian Hospital Foundation. 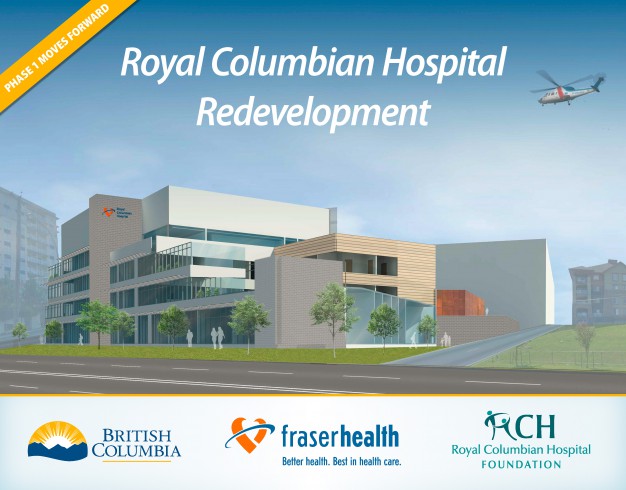 New Mental Health and Substance Use facility. Potential concept only

New Westminster, B.C. – {May 27, 2015} – A new mental health and substance use facility, outpatient clinics and better care for seniors are part of the first phase of redevelopment of Royal Columbian Hospital.

Health Minister Terry Lake today announced business plan approval for phase one of the redevelopment, with a $249.8 million commitment from the Province and $9.1 million from the Royal Columbian Hospital Foundation.

“Government wants to be sure we are moving in the right direction for the health care needs of those in the Lower Mainland and all British Columbians, especially for more vulnerable populations such as seniors and those with substance use and mental health concerns,” said Lake. “The redevelopment of Royal Columbian Hospital, as well as a new St. Paul’s, will allow us to make great strides in delivering patient-centred care well into the future.”

Phase one also includes a new parkade and an energy centre to provide the power and utilities infrastructure required to support the current campus and future work. The helipad will also be relocated.

The total cost of phase one is budgeted at $258.9 million.

As well, the Province has signed a Memorandum of Understanding with the City of New Westminster on planning for future improved road, bike, and pedestrian access to better meet the hospital’s needs.

“This MOU signals our commitment to work together on a long-term goal that will improve the safety, accessibility and connectivity to and from the hospital, and through the city of New Westminster,” said Minister of Transportation and Infrastructure Todd Stone.

The overall redevelopment project will be completed in three phases. Phase one begins with construction starting this fall for the helipad, and in 2016 for the mental health and substance use facility and energy centre. Phase one is scheduled to be complete in 2019. The redevelopment project will address growing service capacity needs, help to ease congestion and enhance the working environment for health professionals.

Phases two and three are expected to add new acute care beds, a new and larger emergency department, new operating suite, and upgrades to existing spaces. Final scope and schedule will be outlined in a separate business plan, expected in 2016.

“The individuals, businesses, community groups and foundations that give generously to Royal Columbian Hospital understand the importance of providing exceptional health care to the region,” said Royal Columbian Hospital Foundation President and CEO, Jeff Norris. “We’re grateful to the BC Government and Fraser Health for the opportunity to work with our donors to support this significant project.”

“For generations, Royal Columbian Hospital has played a critical role in New Westminster by delivering high quality health care to our residents and serving as the city’s largest employer,” said Mayor Jonathan X. Coté. “The redevelopment plans announced today will generate significant economic and social benefits for our city by stimulating the creation of future business and medical opportunities, and creating demand for additional amenities in the area. We are very proud to have this outstanding facility in our community.”

Royal Columbian Hospital, first opened in 1862, is a vital referral centre and regional centre of excellence for trauma, critical care, cardiac care, maternity, neonatal intensive care and neurosurgery. As British Columbia’s oldest hospital, and one of its busiest, it provides expert care for the most seriously ill or injured and is one of two adult trauma centres in the Lower Mainland.