RFQ issued for phase one of Royal Columbian Hospital redevelopment 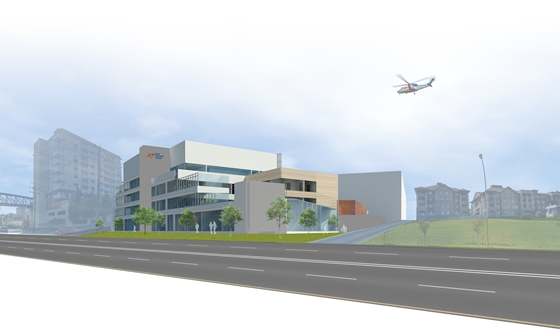 Above: New Mental Health and Substance Use facility. Potential concept only.

New Westminster, B.C. – {August 14, 2015} – The start of phase one of the redevelopment of Royal Columbian Hospital moved a step closer today with the issuing of a Request for Qualifications (RFQ).

The RFQ is the first stage in the competitive selection process and invites teams to express their interest in designing and building a new mental health and substance use facility, energy centre and underground parkade. Fraser Health will then identify a shortlist of three teams that will be invited to submit detailed designs.

“This redevelopment project will serve the health care needs of British Columbians for many years, and moving forward with the RFQ is a significant milestone in getting work underway,” said Health Minister Terry Lake.

The total cost of phase one is estimated at $258.9 million, with the Province providing $249.8 million and the Royal Columbian Hospital Foundation committing $9.1 million. Phase one construction is expected to start in 2016 and finish in 2019.

“Fraser Health is excited to be taking this next step forward in the redevelopment of Royal Columbian Hospital,” said Michael Marchbank, President and CEO of Fraser Health. “The new 75-bed acute mental health and substance use facility will provide people with more services and outpatient clinics to help them transition from hospital care to community mental health services and to community life.”

Fraser Health is also seeking a partner to manage the construction of system upgrades to existing buildings, and to connect various services and distribution systems to the new energy centre as well as a campus communication hub.

Also in phase one, but not part of the RFQ, is the temporary relocation of some hospital parking starting Fall 2015. In 2016, the hospital’s helipad will be moved to allow for construction of the new mental health and substance use building.