Roger Pinette had been feeling unwell for a few days, struggling with a bad cough, headaches, a fever, and fatigue. They are the type of symptoms that have come to be associated with COVID-19, but back in early March 2020 it was not yet front and centre in people’s minds. It would be several weeks before the 72-year-old Langley resident would learn he had contracted a near fatal case of the respiratory illness, only hearing the news after he had awoken from a lengthy stay in Royal Columbian Hospital’s Intensive Care Unit.

“The (pandemic) curve was a flat line at the beginning of March,” says Roger. “The family had no suspicion that it was COVID. I think had it happened later, we would have been more suspicious.”

As his condition deteriorated at home, Roger’s wife, brother, and daughter coaxed him into getting checked out. Within days of going to his local hospital, Roger was intubated and transferred to Royal Columbian, where he became among the hospital’s first COVID-positive critically ill patients to be ventilated in the ICU.

“He was in relatively rough a shape, as a lot of people who have true COVID-19 are with severe hypoxemic respiratory failure,” says Dr. Robert Sharpe, a critical care physician at Royal Columbian Hospital. “He had quite bad inflammation of his lungs to the extent that it made it difficult for oxygen to diffuse.”

Amid concern over his prognosis and with visitors being restricted, the hospital provided regular updates on Roger’s condition to the family and set up virtual visits using an iPad.

“They were really able to connect us to him, even though we were sort of helpless,” recalls daughter Celia. “They took my two daily phone calls with understanding. They played my voice recordings to my dad and read my mom’s letter to him. They FaceTimed me as well as my sister in Germany so we could talk to him while he was asleep.” 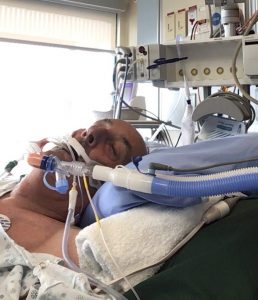 It was difficult to wean the profoundly weakened Roger from mechanical ventilation.

“His breathing muscles had wasted away while the ventilator breathed for him,” notes Respiratory Therapy Clinical Supervisor Jason Zurba. “We needed to help him strengthen his muscles to a point where he could manage his own breathing without the ventilator.”

It also took weeks before a swab test finally came back negative for COVID-19. After a number of challenging and uncertain weeks, his condition improved enough that Roger was transported back to Langley’s hospital. Following a serious complication, he was then sent to Abbotsford before he completed his recovery at New Westminster’s Queens Park Care Centre. He returned home in July, four months after first becoming ill.

Roger Pinette and his wife at home in September 2020

Just over a month later, Roger says he is feeling wonderful, despite the ongoing effects of his critical illness. He regained most of his weight back, after losing as much as 50 pounds while in hospital.

“My lungs are going to require some time,” he adds. “My left side has nerve damage, but I’m doing some physio. I feel positive.”

Roger already had an appreciation for Royal Columbian after previously undergoing open heart surgery. His gratitude has only grown following this latest health crisis.

“They’re taking a great risk to take care of people like us that have such a serious virus,” he says.

Prefer to give now?
Consider committing to a monthly gift
MONTHLY GIVING