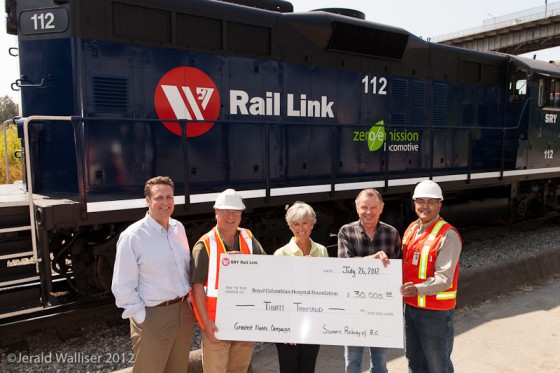 The New Westminster-based freight transport company has taken an innovative approach to promoting injury prevention amongst its employees by directly tying its safety performance to donations to Royal Columbian Hospital (RCH) Foundation. Money saved as a result of eliminating  lost time injuries (injuries requiring employee time off for treatment or rehabilitation) is matched by the company and donated toRCH Foundationin support of its $1.5 million Reasons to Care, Reasons to Give campaign that will help RCH fund critically needed equipment throughout the hospital.

“We want our people to go home safely,” says Frank Butzelaar, President and CEO, Southern Railway of British Columbia. “By partnering with Royal Columbian Hospital we are able to recognize the accomplishments of our employees while giving back to the community in a way that keeps  safety top of mind and  promotes a strong sense of pride and community within our group.”

Workplace-related injuries accounted for nine per cent of trauma patients cared for at RCH in 2011–2012, according to the RCH Trauma Registry Database.  RCH is a provincial referral centre for trauma and receives more trauma patients by B.C. Air Ambulance than any other hospital in B.C.

“Southern Railway is to be commended for its investment in injury prevention for its workers,” says Lisa Constable, Clinical Nurse Specialist, RCH Trauma Program. “Being injury-free for an entire year is a spectacular accomplishment, and we are very grateful for their support as a result of their success.”

“Southern Railway is a valuable partner for RCH in the community as they not only help RCH deliver the best in care to its patients, they deliver the best in injury prevention practices for their employees,” saysRCH FoundationPresident and CEO Adrienne Bakker. “Their choice to support RCH’s Reasons to Care, Reasons to Give campaign will mean that RCH’s medical teams have access to the most advanced technology to care for critically ill and injured patients from across the province.”