Cathy MacDonald suspected something had changed when even a walk up the driveway or a simple stroll along a flat path began to challenge her stamina. Still, the results of a bone marrow test came as a shock. The 63-year old Belcarra resident was diagnosed with multiple myeloma, a blood cancer that forms in plasma cells and is typically incurable.

“When I found out that I had it, I knew I wasn’t going to look on the Internet,” says Cathy. “The one day I did do it, I couldn’t sleep that whole night.”

She focused on her treatment, which meant almost weekly visits to Royal Columbian Hospital’s Medical Daycare Clinic for close to 11 months and involved a cocktail of drugs, some taken intravenously (IV) and others in the form of pills.

This length of treatment is typical for people who are given the drug cocktail, according to Royal Columbian Hospital oncologist Dr. Michael Noble.

“Patients seem to do better with prolonged treatment,” says Dr. Noble. “Then we usually stop, we’ll watch them and hope they have a long remission. Whenever they need more treatment, we’ll come back with another combination of drugs.”

Located on the bottom floor of the hospital’s Columbia Tower, the Medical Daycare Clinic provides a space for patients to receive their cancer treatment under the helpful supervision of medical staff.

“They were very attentive,” Cathy notes. “I tried to use their time wisely when I was seeing them, because when you’re having an IV, they check on you often.”

The space also has the added benefit of having been renovated in recent years with the help of donors to Royal Columbian Hospital Foundation.

“It’s a very nice space with the soothing colours,” says Cathy. “The colour of the glass and the lighting is such that you wouldn’t realize you are in the basement.” 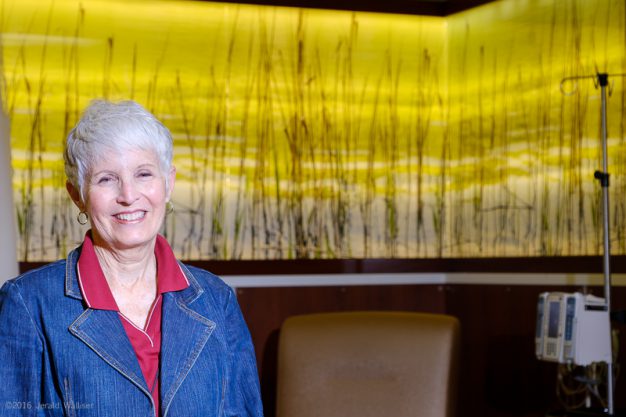 After all those visits lasting nearly a year, Cathy finally received the big news. She was now in remission. “It was unbelievable,” she says.

These days, she is tested every three months. “Usually, the first sign of a relapse is a change in the lab work,” explains Dr. Noble. “We follow abnormal protein levels in the blood and sometimes the urine.”

While her treatment ended, Cathy decided to continue her regular visits to the hospital, this time by volunteering with the Foundation.

“This has been a way for me to give back to the hospital in addition to making a donation in support of Medical Daycare,” she says. “My hearftfelt thanks for the exceptional care, support and treatment to Dr. Noble and everyone who looked after me.”