Michael Coss has made it his mission to inspire. Twelve years ago, his future appeared bleak to many after the van he was driving rolled over on the Coquihalla Highway. He suffered a traumatic brain injury and remained in a coma for six months at Royal Columbian Hospital, the health region’s referral centre for brain and spine surgery.  While the accident permanently changed his life, the 49-year-old sees lots of opportunity in his remarkable and ongoing recovery.

“I don’t feel sorry for myself,” Michael says while at the Langley home he shares with other survivors of traumatic brain injuries. “If I had the choice, I like how I am now. I’m a better person having gone through what I have.”

While Michael has no memory of being at Royal Columbian, clinical nurse specialist Trudy Robertson remembers. She was a clinical nurse educator on the hospital’s neurosciences unit when Michael arrived.

“His care was provided 100%, in all aspects, by the care team,” Trudy recalls. “He was dependent on us for his survival.”

In addition to treating the severe diffuse axonal brain injury, the care team had to work to prevent a number of potential complications. These can include pneumonia, infections and muscle spasticity.

“Our job is to put actions in place to prevent complications from occurring,” explains Trudy. “It can be quite a chase, considering how sick people can become and how they respond to treatment. There are so many things we are trying to keep on our radar.” 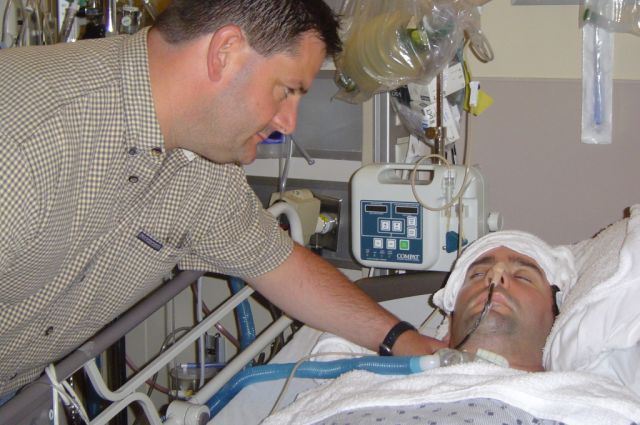 For months, the progress was very hard to recognize. Michael’s parents Bob and Suzie came from Quebec to be at their son’s bedside every day.

“One day, as we were taking Michael out of his room, a close friend of his came out of the elevator,” Bob remembers. “As soon as Michael heard his name, we saw tears coming out of his eyes. That was the first sign of recovery.”

A few months after being admitted, with few encouraging signs in his prognosis, Michael’s parents arranged for him to be transported regularly to Richmond for special hyperbaric oxygen therapy treatment.

“Paramedics would come, and we would wrap Michael in blankets and put him on a stretcher and take him,” says Suzie.

From there, Michael started showing new signs of recovery. His eyes started to focus. His fingers began to move.

“I can remember some of the nurses being so full of enthusiasm and so happy for Michael,” recalls Bob.

Michael had to relearn everything, from swallowing to sitting and speaking. He eventually progressed from a wheelchair to his own two feet.

“I think his recovery was remarkable,” says Trudy. “He and his family really contributed to a great portion of his recovery being as successful as it has been.”

These days, Michael seeks many opportunities to share his story and help others who face similar challenges.

Make a difference for patients like Michael. Provide support for our neurosciences team when the moment is critical.