As students enjoyed the first days of summer vacation, Darren Stewart was closing the books on another school year. The 49-year old principal of Como Lake Middle School in Coquitlam was at home, winding down for the night, when he first grew uncomfortable. He thought it might be indigestion, but it eventually progressed to a cold and clammy feeling. By early next morning, Darren’s condition would dramatically deteriorate, necessitating a major lifesaving effort at Royal Columbian Hospital.

Como Lake Middle School principal Darren Stewart is back to work a few months after a near fatal cardiac arrest.

“I would go to bed and try to fall asleep, but it wasn’t happening,” remembers Darren about a restless night trying to shake off his symptoms. “Eventually, I said to my wife we need to phone 911.”

First responders confirmed Darren was having a heart attack, and he was sent by ambulance to Royal Columbian Hospital – the region’s emergency cardiac care centre and the busiest one in the province.

The hospital’s cardiac catheterization lab diagnoses and treats thousands of people each year, using catheters, balloons and stents to quickly restore the blood flow in blocked arteries without the need for major surgery.

In recent months, donors to Royal Columbian Hospital Foundation have been helping to completely upgrade the equipment in both cath lab suites, ensuring the facility can continue to provide the highest level of care during cardiac emergencies.

For Darren, his emergency took on a whole new level of intensity even before he was brought to the cath lab. Within minutes of arriving at the hospital, his heart completely stopped.

“He had incessant cardiac arrests in the emergency room,” says interventional cardiologist Dr. Gerald Simkus. “He had to be defibrillated multiple, multiple times, every minute or two.”

As they tried repeatedly to restore a heartbeat, the medical team also turned to the Lucas 2, a donor-funded mechanical CPR system that delivers consistent and regular chest compressions to keep the blood flowing.

“The Lucas gives us very supportable compressions without somebody getting fatigued,” explains Dr. Simkus.

Despite numerous attempts to stabilize him, Darren wasn’t getting any better. In an extreme example of a cardiac intervention, the decision was made to rush him to the cath lab while still undergoing regular defibrillation and mechanical CPR.

“We would clear, zap, and go back to work,” says Dr. Simkus.

Working around all of this activity, Dr. Simkus and the cath lab team managed to identify the problem artery and open it with a balloon and stent. Close to an hour after Darren first went into cardiac arrest, he finally stabilized. 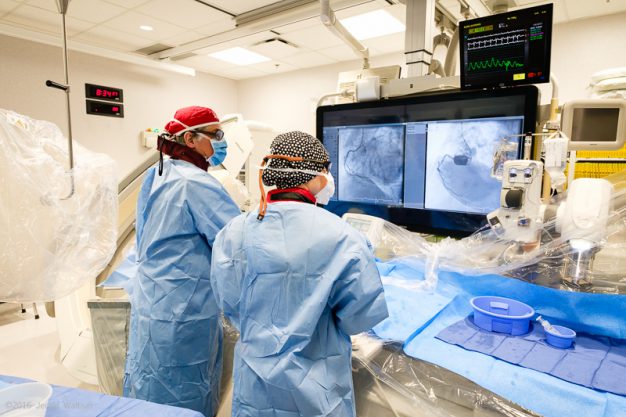 Left: Darren Stewart, principal at Como Lake Middle School. Right: Donors to Royal Columbian Hospital Foundation have been funding a complete upgrade of the equipment inside the cardiac catheterization lab.

[end-move-images-here]
“I just feel very lucky and fortunate,” says Darren about the medical efforts required to save his life. “Having the Lucas machine available and of course, an amazing ER team willing to keep working with me is very humbling. To think that this is my story is very surreal.”

He’s equally impressed with the care he received during his recovery and the way his loved ones were treated.

“I remember just watching the nurses care for my wife and kids and family and friends who were there,” says Darren. “Not only are they treating me, but they are protecting them as well and just being super friendly.”

Among his most memorable moments during his two weeks in hospital was encountering former students who were now working as nurses.

“It was cool to see them in their environment,” says Darren.

Four months after his near fatal cardiac arrest, he’s feeling good and is eager to resume his regular life. “I have begun a gradual return to work, and I am working out with the Healthy Heart exercise program three times a week,” he notes. “Along with getting back to exercising again, which feels great, I am reading labels a lot more carefully and making sure I enjoy and appreciate every moment.”

Make a difference for emergency patients like Darren. Provide support for our ER & cardiac teams when the moment is critical.