It started with mild flu-like symptoms, and Marisa Sitter was surprised that her COVID-19 test came back positive. Over the next few days, the Coquitlam resident’s condition progressively grew worse. In addition to a fever, she was getting dizzy, weak, and eventually had difficulty breathing. Feeling like she was drowning, Marisa made her way to Royal Columbian Hospital, where she spent close to a week in the care of a team that has looked after hundreds of COVID-19 patients since the start of the pandemic.

“My breathing was very laboured, and that caused me to feel quite panicky,” recalls Marisa, who became ill in early February 2021 before vaccines were available to her. “I purchased a pulse oximeter, and I kept testing my oxygen levels. I could see the number dropping, and when the number went down to about 81 or 82, I called 811 and was told to call 911 and go to the hospital.”

In the emergency department, Marisa underwent some tests and was given oxygen. She was then transferred to a COVID-19 unit that opened at the start of the pandemic for patients who need to be hospitalized because of the virus but are not yet critically ill.

Ushma Maghera, a nurse and patient care coordinator on that unit, says her team tries to do what they can to help their patients stay out of the intensive care unit.

“There is a trajectory that we see often with our patients. There is some shortness of breath,” she explains. “We monitor them frequently, check their vitals, and review their oxygen saturations. Their respiratory status can change quickly. We also give them IV medications and supplementary oxygen sometimes. We support them as best we can through the next few days.”

Marisa was on oxygen and intravenous therapies and stayed connected to loved ones by phone while hoping she would get better soon.

“The first three days were very difficult, and I was scared,” she says. “It was terrifying, and I just felt so bad for the other patients as well. I just see all the different ways that people were suffering with COVID. The person next to me was affected with blood clots. The woman across from me could not eat at all.”

There have been a lot of learnings and adjustments to protocols since the start of the pandemic. One strategy for care that has become common is to get patients on their stomachs.

“If they’re proning, they’re opening up their lungs and they’re getting the oxygen they need,’ Ushma explains. “If they can’t do their stomach, then we have them slightly proned, or we’re having them sit basically upright, 90 degrees.”

Marisa, who had previously been impressed with the care her father had received at Royal Columbian a few years before, was comforted by knowing she was in good hands.

“I could tell how busy they were, and no matter how busy they were, they still took the time to answer questions and provide the best care that they could,” she says. “I have so much compassion and respect for the healthcare workers in the past couple of years. They really are heroes. There is no other word.” 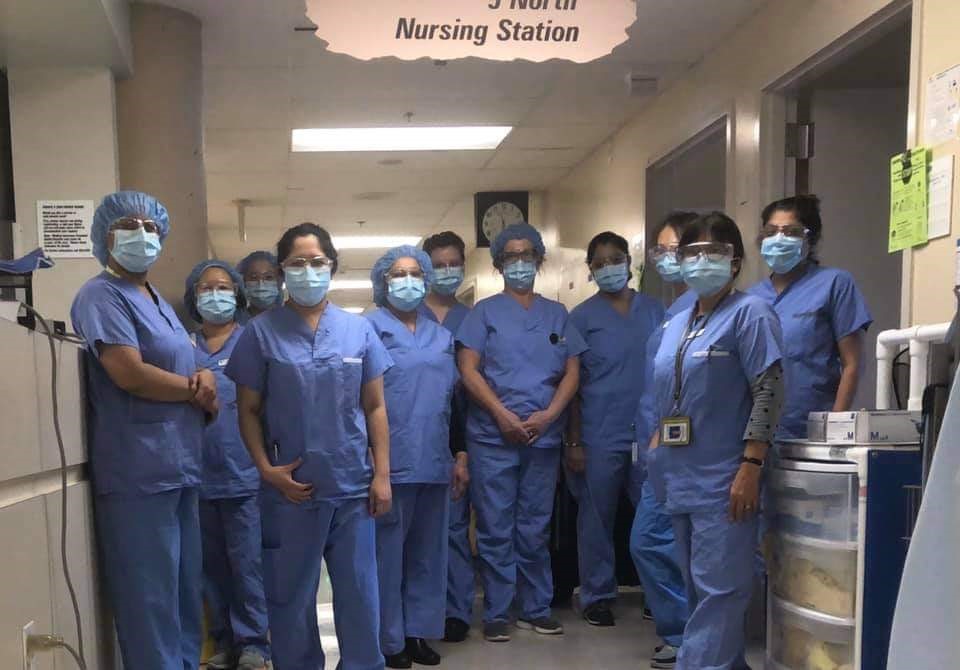 “I haven’t seen a team like this ever,” adds Ushma about her colleagues. “I’ve never had a team that’s so dedicated and so passionate and so flexible with the amount of change and the influx that has come through. Now, as strong and as comfortable as they are, they’re also now tired. There is definitely fatigue kicking in.”

Just about a week after being admitted to the COVID unit, Marisa was feeling well enough to go back home. Eight months later, she reports still feeling quite a bit of fatigue. An elementary school teacher, she has been seeing an occupational therapist to build her stamina and work towards returning to her classroom full-time.

“I’m still recovering and still have lung damage,” she says. “I had mild asthma and that was exacerbated over the course of a few months after I had COVID.”

Marisa is one of close to 400 patients discharged from Royal Columbian’s COVID-19 unit during the pandemic’s first 20 months. Whenever someone is sent home, Ushma says the unit will cheer as the patient leaves. She says there has been many highs and lows.

“And the lows are always difficult,” says Ushma. “The staff are always affected by those ones, because you think you’ve done everything that you possibly can to support this patient, and unfortunately their journey is much different than anticipated.”

Make a difference for emergency patients like Marisa. Provide support for our caregivers when the moment is critical.