It started with a headache the night before. Christine Ashton, 23 weeks pregnant, knew having twins meant an increased risk of complications. When she still felt unwell the next day, she described her pain to a relative. The conclusion: she was having contractions.

Ashton was taken from her Surrey home to Royal Columbian Hospital, where she was closely monitored by a team. Meantime, the hospital’s neonatal intensive care unit was preparing itself for two tiny new patients.

Just after midnight, days before Thanksgiving, Ashton gave birth to two boys. “All I remember is this humongous room, and the first thing I thought of was we’re having a party,” she remembers. “It was like, wow, all these people for us. It was overwhelming at first.”

First came Thaddeus, weighing only 405 grams, or “less than a pound of butter,” says Ashton. Quinntin was born two minutes later, at 570 grams.

As one of four hospitals across the province prepared to handle the most fragile newborns, Royal Columbian Hospital cares for hundreds of tiny ones each year. But twins as premature as Thaddeus and Quinntin are rare.

“I was in shock,” says Ashton. “Especially not knowing if they were going to survive, and knowing their chance of survival wasn’t very high. I just wanted to give them a chance.”

“Here we had a situation where we had micro-preemies at less than 24 weeks, and on top of it, twins,” notes neonatologist Dr. Zenon Cieslak. “The outcomes are not generally good.”

Thaddeus and Quinntin spent more than six months in the neonatal intensive care unit, supported by specialized equipment like Giraffe Omnibed incubators and a jet ventilator. All under the care of a team with whom Ashton quickly formed a close bond. 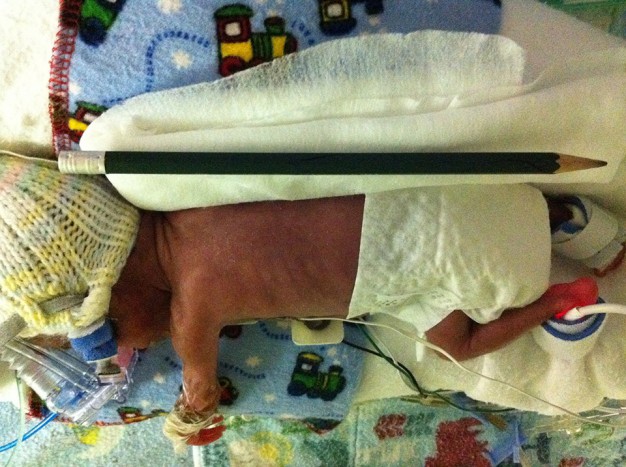 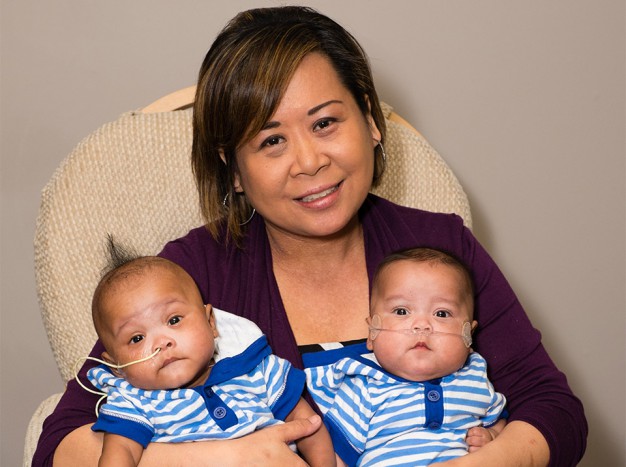 Left: Thaddeus, beside a pencil to show his tiny size after birth.

“It started from day one, says Ashton. “I was, of course, a mess. Very emotional, but the staff were very supportive. I always think of the nurses, my angels in comfortable shoes.”

Despite a number of challenges, Ashton noticed gradual improvements in her boys’ conditions. And just before Easter, she was finally able to bring them home.

“The journey has been a long one, 188 days, and everyone keeps asking, are you going to have more kids,” laughs Ashton. “If I did have any more children, I would definitely go back to RCH, no doubt about it.”

“I’ve seen them in my office for follow-up,” says Dr. Cieslak. “And they are strong, they respond really well, they are smiling, and they are definitely a joy to the parents, and obviously we here are very proud of it.”