Jyotika Prasad and her husband were painting their home the weekend before a planned trip to Mexico when she started feeling uncomfortable. The 41-year old Vancouver resident woke up the next day with sore muscles, a lethargic feeling and a deep pain in her upper back. “I thought I pulled some muscles and was sore from doing so much,” she recalls. As the symptoms persisted, Jyotika made her way to Burnaby General Hospital. There, she received shocking news: she had suffered a heart attack and was a type 2 diabetic. After being sent for further testing at Royal Columbian Hospital - the region’s cardiac care centre - she learned more troubling information. She would need quadruple bypass surgery.

As she processed the first news, Jyotika was stunned. “I’m too young,” she thought. “This can’t be happening to me.” Devastated, she would spend the next few days in hospital instead of vacationing in the sun.

Jyotika was initially sent to Royal Columbian for an angiogram to determine the extent of the heart problem. The results revealed she would need open heart surgery. “Dreams of our future, starting a family, felt shattered,” remembers Jyotika.

The test showed she had serious blockages in four arteries. Royal Columbian cardiac surgeon Dr. Derek Gunning says it’s uncommon for someone of Jyotika’s age to have that level of coronary artery disease.

“As a large referral centre for the Fraser Valley, we see a few times a year people in their 30s, 40s and 50s coming in with those kinds of blockages,” says Dr. Gunning. “Much more commonly if you do have blockages at that age, they are usually much less severe and maybe in one or two arteries.”

Back home and waiting for her day in the operating room, Jyotika reflected on her lifestyle and family history. Her father, for instance, had also had heart disease at a young age. She realized she would need to make immediate changes.

Among those changes was to quit smoking. Dr. Gunning says the habit likely contributed to the progression of her disease. “We know smoking is a big risk factor for coronary artery disease, and the habit certainly didn’t help her,” says Dr. Gunning.

The day of the surgery, Jyotika would yet again receive startling news. A new test showed she had a leaky heart valve. “I completely felt defeated,” she says.

Jyotika’s surgery was postponed while she considered whether to have a mechanical or artificial valve. She appreciates the time Dr. Gunning took to review the options with her and her husband. “He was a part of that family discussion,” says Jyotika. “It just meant the world to me.” 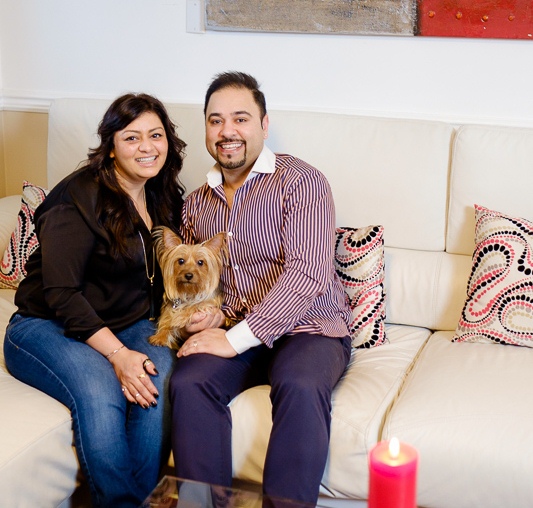 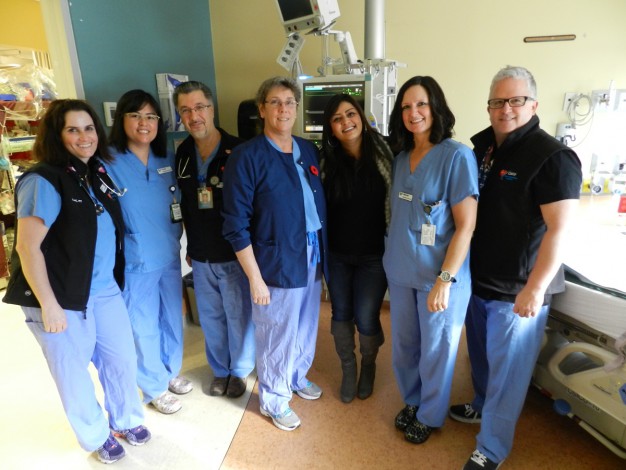 Left: Jyotika, at home with her husband Jamel and their dog Shia. Right: Jyotika visits staff at Royal Columbian, one year after her open heart surgery.

Her surgery was challenging, and it took time for her heart to properly beat on its own again. She recovered in the cardiac surgery intensive care unit for several days before being moved to one of the wards for a further three weeks.

“My husband believes the staff were amazing,” says Jyotika. “When I was critically ill, they provided emotional support, explained what was happening and showed true compassion.”

She left Royal Columbian feeling the staff provided not only physical care, but also emotional support to her and her family.

To mark her anniversary, she returned to Royal Columbian to thank the health care professionals. “I always thought about them,” says Jyotika. “My one year anniversary was a milestone. I wanted them to see how I was doing, to thank them for the care they provided me and my family and how that resulted in a better, healthier me.”